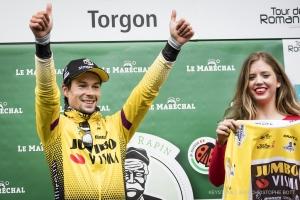 The Giro dell'Emilia is held annually in Bologna, Italy. Since 2005, it has been organised as a second-tier event organised by the International Cycling Union (UCI) as part of the UCI Europe Tour.

Roglič won the 103rd edition of the race, a 207-km stage between Bologna and San Luca, finishing 15 seconds ahead Michael Woods of Canada and Sergio Higuita of Colombia.

The first Slovenian to win this traditional race has won this season the UAE Tour, Tirreno-Adriatico, Tour de Romandie and Vuelta a Espana to establish himself as one of the finest riders in the world at the moment.

Roglič already won the stage of this year's Giro d'Italia, in which he finished third, which featured the same climb as the Giro d'Emillia.

The last time I was here I won, and for this reason I certainly like San Luca very much," said the 29-year-old, who will take part in...