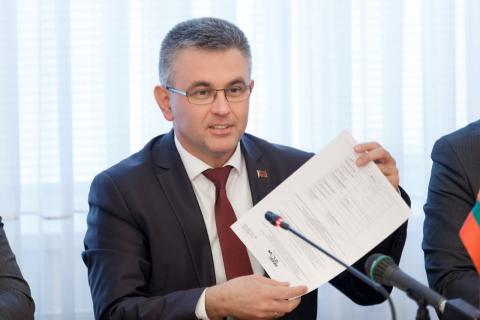 Moldova's breakaway region of Transnistria has asked its ally and sponsor Russia to allow it to issue Transnistrian "passports" at the diplomatic office it opened in January in Moscow.

The region, which broke away from Moldova in 1992, backed by Russia, has not been recognised by any member states of the United Nations - Russia included.

When the office opened in Moscow, both the Russian and Transnistrian authorities described its purpose as the further "development of cultural, social and economic relations with Russia".

Transnistria's top diplomat, Vitaly Ignatiev, said on Sunday that the region's Foreign Ministry was working on developing mechanisms to ensure passports and other Transnistrian documents could also be issued in Russia.

Transnistria issues its own documents - but these cannot be used to travel abroad and are only of symbolic use, given the region's unrecognised status. Transnistrian papers issued are only valid inside the region.

If Russia allow Transnistria to issue passports from its office in Moscow, some say it will signal a form of diplomatic recognition of Transnistria as an independent state.

"We are working on this. Throughout the world, diplomatic institutions also carry out consular functions … we are now working on these mechanisms that will help our citizens to exercise their rights," Ignatiev said in an interview with local media in Tiraspol.

Ignatiev made the statement ahead of the opening of fresh conflict settlement talks between Moldova and Transnistria in Bratislava, Slovakia, under the...