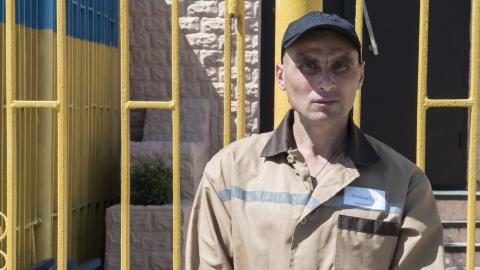 "There were three militants there who started asking me about the war. I said, 'I don't know anything about the war,'" Litvinov recalled.

Litvinov agreed to drink with the separatist fighters, but they decided that the cowherd seemed suspicious, and reported him.

A group of men in black then seized him from the hospital, took him away in a car and abused him.

"They tortured me with a blowtorch, they beat me, they opened fire between my legs. They tore off my Orthodox cross, took my mobile phone, broke my glasses," he said.

His tormentors claimed he was a member of the Dnipro-1 regiment, a special forces unit that was controlled by the Ukrainian Interior Ministry.

Litvinov was accused of killing 39 civilians in Ukraine's Luhansk region and raping eight women, including a 12-year-old girl.

"They attached an explosive, asked if I had fought in this Dnipro battalion, I said that I had never fought, I am a peaceful citizen… They then tormented me some more and brought me back to the hospital," he said.

Russian law enforcement officers then took him away from the hospital and detained him.

Back at home, his brother Volodymyr Litvinov was confused when he found out what had happened.

"I come home and my mother tells me Serhiy is in jail," he said. "I don't know for what, I know that he went to the hospital and that's it, he had a toothache."

Russia currently holds about 100 Ukrainians who are considered by the Kyiv authorities to be political prisoners; Crimean Tatar human rights activist Emir-Hussein Kuku and Ukrainian activists Valentyn Vygovsky and Glib Schabliy are among them.