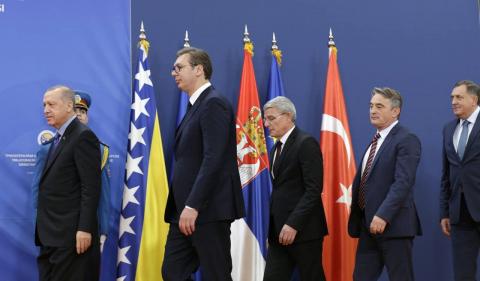 Serbian President Aleksandar Vucic, his Turkish counterpart Recep Tayyip Erdogan and the three members of the Bosnian tripartite presidency attended a ceremony on Tuesday in Sremska Raca in north-west Serbia to mark the official start of construction work on the highway that will link Belgrade and Sarajevo.

The 1.3-kilometre bridge being constructed in Sremska Raca will physically link the two countries over the Sava river.

"We see the bridge we are building is a bridge of friendship that is important to the whole region," Erdogan told media at the ceremony.

The Serbian part of the highway is being built by a Turkish company and its 250-million-euro cost is being partially funded by a loan from Turkey's Exim Bank, with Serbia funding the rest from its state budget.

Erdogan said earlier in the day in Belgrade that the new highway "will move Serbia and Bosnia closer".

"A road is a synonym for civilisation, life. If we manage to make this, this road linking two nations, we will have an even stronger impact on people. It will make the region a place that attracts people. That means they won't be leaving," he added.

Milorad Dodik, the Serb member of Bosnia's tripartite presidency, described the start of construction as a "historic day for the region".

It has not yet been made clear how the Bosnian stretch of the highway will be funded, although Turkey has suggested that it will provide the money, in another extension of Ankara's soft power in the Balkans.

The key question is whether Turkey will provide a soft loan, with terms favourable to the borrower, or seek a concession for Turkish companies to build and manage the highway, sections of which may not be financially feasible based only on the collection of road tolls.<...