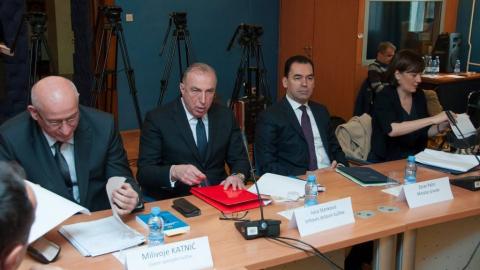 Montenegro's Prosecutorial Council decided on Tuesday that Ivica Stankovic should remain the country's acting Supreme State Prosecutor because no one has applied to be his successor.

"Stankovic was the only candidate who expressed his interest in holding the office on an acting basis until the election of a new Supreme State Prosecutor," said Prosecutorial Council member Velimir Rakocevic.

Rakocevic said he would seek to investigate allegations of corruption in the prosecutor's office within three months.

"I have demanded that a competition for the election of the Supreme State Prosecutor be called immediately and if this is not completed, I will personally seek the dismissal of Stankovic in three months," Rakocevic told Vijesti newspaper.

Businessman Dusko Knezevic has alleged that he had sent 800,000 euros to the state prosecution to stop an investigation into foreign clients of Atlas Bank, which he owns. Atlas Bank is currently being managed by Montenegro's Central Bank because of the alleged financial irregularities and the investigation into them.

Since September 16, Knezevic has been posting on social media taped conversations that he had with the secretary at the prosecutor's office, Nenad Vujosevic.

In the phone calls, Vujosevic admits to passing bribe money from Knezevic to supreme prosecutor Stankovic. Vujosevic is now in custody while under investigation.

But Stankovic has denied the allegations and called for Knezevic's claims to be investigated.

"I have no intention of withdrawing from the role which I performed in a dignified manner," Stankovic told Montenegrin public broadcaster RTCG last Thursday.

Lawyer Branislav Lutovac said that the decision by the Prosecutorial Council to keep...