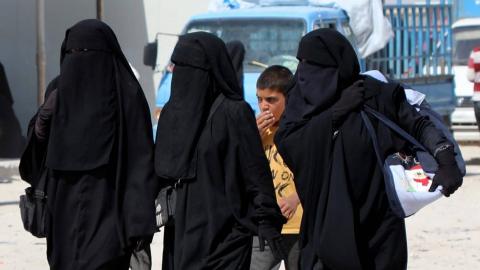 Nine members of the terrorist organisation, the so-called Islamic State, ISIS, who have been on the Syrian front in the past, will soon be deported from US or Kurdish-run camps in northern Syria to Bosnia and Herzegovina, the country's Minister of Security, Dragan Mektic, confirmed to BIRN.

"Bosnia and Herzegovina has long since issued international arrest warrants for these people and the process of ending their deportation is ongoing. After the nine suspects arrive, they will be handed over for further processing," Mektic told BIRN.

Most of them were members of a unit commanded by jihadist from Belgrade, Serbia, Goran Pavlovic, according to the media.

Six months after the US authorities declared the fall of the so-called Islamic State, more than 100 men, women and children originally from Bosnia and Herzegovina remain in camps in Syria.

One trial is currently ongoing before the courts in Bosnia for organising a terrorist group and leaving for the Syrian battlefields. Ibro Cufurovci is accused of participating in terrorist activities under the name Abu Kasim Albosni and of providing assistance and fighting on the side of ISIL/ISIS forces in Syria in the Beit Komandos unit, which later changed its name to "El Aqsa".

His trial began after Bosnia's prosecutor's office rejected a plea deal in the middle of last month.

According to a 2014 criminal code, all Bosnians who leave the country to fight in foreign wars must be prosecuted under terrorism charges. Bosnia's top court, the state court,...