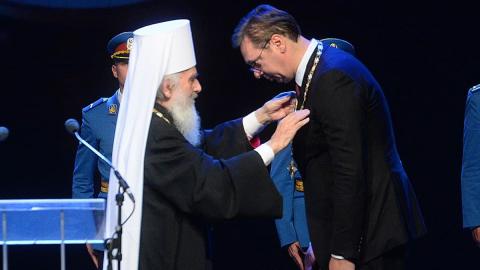 Serbian Orthodox bishops have voiced concern for the image of the Church after their leader, Patriarch Irinej, on Tuesday handed President Aleksandar Vucic a prestigious award for the "great deeds" he had done for Serbia and Kosovo.

A group of 14 bishops said in a letter to the Patriarch sent the same evening that they feared the reputation of the Church might be tarnished.

"He has done great deeds, not only for our time, but for the whole of Serbia and its future," Irinej said on Tuesday at a ceremony celebrating the 800th anniversary of the Church's autocephaly, or ecclesiastical autonomy.

The Patriarch used the occasion to give the President an award named after the patron saint of Serbia, St Sava, a 12th-century prince and monk who became the first archbishop of the autocephalous Church.

The official explanation said President Vucic had received the Order of St Sava for "his active love for the mother church, unwavering commitment to the unity of the Serbian people and the tireless struggle for the integrity of Serbia, especially for the preservation of Kosovo and Metohija within its borders".

The nationalist-leaning Church is strongly opposed to Serbia making any concessions over the former province of Kosovo, which is mainly inhabited by ethnic Albanians and declared its independence in 2008.

Vucic said in his acceptance speech that the award of the order obliged him to "fight harder for Serbia and its unity".

He intended "to fight for Kosovo and Metohija and also for support for our people west of the [river] Drina and the Danube, but also in Montenegro and wherever they live," Vucic said, referring to Serbian communities in Bosnia, Croatia, Montenegro and elsewhere.