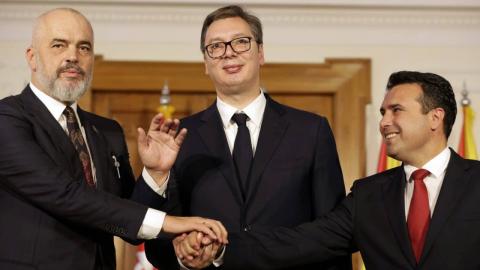 Leaders of Serbia, Albania and North Macedonia have signed a so-called "mini-Schengen" deal, which, modelled on the passport-free zone of the EU, envisages free movement of people, goods, capital, and services between their three countries. Officials of the three countries said they expect all six countries of the Western Balkans to join the area soon.

"We are doing this for the great benefit to our citizens, convinced that people in our countries deserve a better future, higher living standards and a much lower unemployment rate," Serbian President Aleksandar Vucic told a joint press conference in the northern city of Novi Sad.

Vucic added that by 2012, he expected people from all three countries to be able to could cross their borders using only their IDs.

The Prime Minister of Albania, Edi Rama, said the leaders of three countries had agreed to implement four fundamental freedoms in the Western Balkans. "Open issues that exist in the heart of the region should not prevent the parties [countries] from agreeing to disagree on some issues and agreeing on what concerns all citizens," Rama said.

Rama also pointed out that this was was one of the rare occasions when Balkan leaders had gathered without what he called "EU mentors".

"Instead, we are gathered by the need to develop our economies, by the need to encourage and improve conditions and quality of the life of all citizens," Rama added.

He said that while the goal of all three countries was to be part of the European family, "while this family has its own problems, we can't be hostages of the past or of disagreements".

The Prime Minister of North Macedonia, Zoran Zaev, said he expected the rest of the six Western Balkan states, the WB6, namely Bosnia and Herzegovina,...