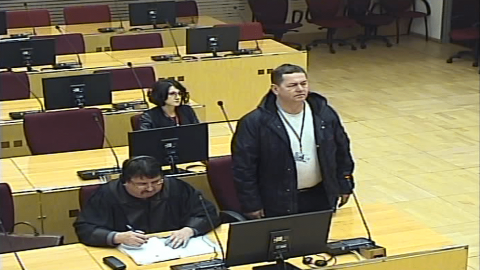 Sretko Pavic, a former member of the Volarska Company with the Sixth Ljubija Battalion of the Bosnian Serb Army, asked the appeals chamber of the Bosnian state court in Sarajevo on Thursday to quash the sentence convicting him of wartime crimes or order a retrial.

The court found Pavic guilty in June this year of having participated in the murder of five civilians in the village of Rizvanovici in the Prijedor area in the second half of July 1992, and sentenced him to 13 years in prison.

The verdict said that the civilians, all members of the Causevic family, were captured in a forest and then detained in a building next to a checkpoint in Rizvanovici.

A day after they were detained there, Pavic and another Bosnian Serb soldier called Pero Stevandic took them out and killed them in the vicinity of a nearby school building. Stevandic has since died.

Pavic's defence said it was appealing against the verdict because of what it said were substantial violations of the law during the criminal proceedings, and because the verdict had wrongly and incompletely established the facts in the case.

Defence lawyer Ranko Dakic said it was indisputable that members of the Causevic family were killed in the village of Rizvanovici, but that Pavic was not the killer.

Dakic explained that a protected witness codenamed S-1 was the only alleged eyewitness to the killings and accused him of trying to shift the guilt for his own wrongdoing onto Pavic.

"Witness S-1 gave false testimony… Witness S-1 fabricated all this with the aim of avoiding his own responsibility," Dakic said.

He also said that troops from the Ljeskarska Company participated in detaining the Causevics, while Pavic was a member of the Volarska Company.