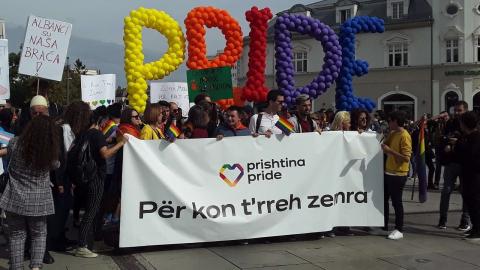 Marking Kosovo's third Pride Week, the main squares of the capital Prishtina were filled with people attending the Pride Parade under the slogan "Whoever your heart beats for", and which passed by the government building, the parliament and other landmarks of the city.

The organisers of the event made a speech voicing the key demands of the LGBTQI community and stressing that the parade is not a march only for LGBTQI rights but for human rights in general.

This year, events have focused on raising awareness about the obstacles facing the LGBTQI community via movie and guides for professionals working in health and journalism, acknowledging the daily life of the community within Kosovo via exhibitions, and increasing understanding of the legal framework.

The main focus, however, is on getting both the government and especially the courts to respect and implement the law as it impacts on sexual minorities.

Some progress is being made. On August 22, for example, the Court of Appeals approved the request of LGBTQI rights NGOs for transgender persons to allowed to change their name and gender in the civil registry.

One of the organisers of the Pride parade, Lend Mustafa, said it had been a very difficult year for Kosovo's LGBT community.

"Our hearts beat for those who were kicked out by their family, for transgender people who were denied their identity until recently, for those who thought, at least once, that it would be better if it didn't beat at all."

Pride Parade organisers also condemned hate speech and other hate-motivated crimes and called for more acceptance of the LGBTQI community by the rest of society.

The speeches were followed by a concert. As in previous years, a strong police presence guarded the event,...