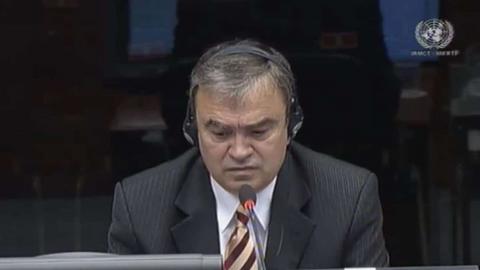 The prosecution at the trial of Jovica Stanisic and Franko Simatovic at the Mechanism for International Criminal Tribunals in The Hague on Thursday used excerpts from Ratko Mladic's war diary in an attempt to prove that the Serbian State Security Service, where the defendants were senior officials, sent paramilitary units from Serbia to Bosnia and Herzegovina in autumn 1995 and had control over them.

Defence witness Srdjan Grekulovic, a former member of a Serbian special police unit, did not deny that official units were sent from Serbia by the Interior Ministry, but denied they were sent there by the Serbian State Security Service, the SDB.

Stanisic, the former chief of the SDB, and Simatovic, former commander of the SDB-run Special Operations Unit are accused of establishing, funding and arming special military units that committed crimes in Croatia or were deployed to Bosnia and Herzegovina, where they were subordinated to or operated in coordination with other Serb forces, in particular the local Serb Territorial Defence force, which later became the Bosnian Serb Army, Bosnian Serb police forces and police special forces.

According to the indictment, one of these units was the Serbian Volunteer Guard, also known as Arkan's Tigers, led by Zeljko Raznatovic, alias Arkan.

The prosecution said that at a meeting between Mladic, Stanisic and Momcilo Perisic, then commander of the Yugoslav Army, which was held on September 30, 1995, Arkan was one of topics discussed.

As quoted in Mladic's diary, Perisic said to Stanisic: "Let's see what to do with the people who went there [eastern Bosnia], because of whom there were some misunderstandings."

Stanisic replied: "There is no command there, political conflicts, towns are falling, Arkan...