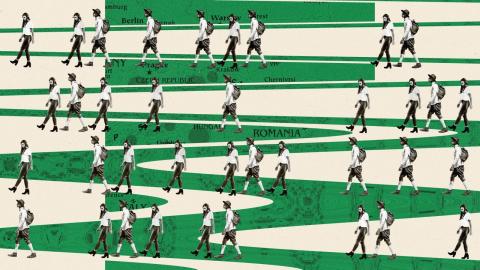 This is the latest in a series of articles about the demographic crisis facing Central and Southeast Europe. See more.

But serious analysis of the region's demographic decline, depopulation and the hollowing out of the labour force is harder to find. Possibly this is because governments have neither credible answers nor the resources available to change things.

If demography is destiny, the Balkan future is bleak — but it is not unique. From Greece to Poland, almost all Eastern, Central and Southeast European countries are wrestling with the same problems.

Moldova has already lost 33.9 per cent of its population. Bosnia and Herzegovina has a fertility rate of 1.26, one of the lowest in the world. Kosovo, with a median age of 29, is the youngest country in the region but does not escape demographic decline either.

The figures and percentages may vary but the trends are the same almost everywhere, albeit with some countries further advanced than others. Serbia's median age is 43, older than the EU average of 42.6.

However you look at it, the demographic future of the Balkans and this half of Europe, afflicted by emigration and chronic low birth rates, is dramatic.

Different from the past

Historically, all countries of the region, and in fact most of Europe, had periods of intense emigration.

In the case of the former Yugoslavia, hundreds of thousands went abroad from the 1960s as gastarbeiters, not necessarily meaning to stay away but many of whom did, perhaps because they had children abroad or the wars or both.