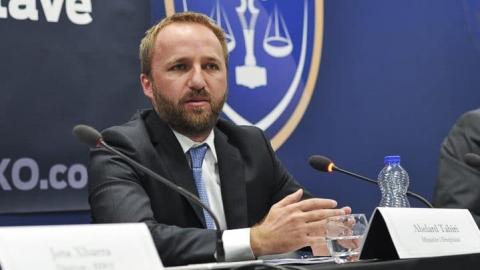 Justice Minister Abelard Tahiri confirmed on Wednesday evening that he has been summoned by the Specialist Prosecution in The Hague to give an interview at the end of October.

"Two weeks ago, I received an invitation by the Specialist Prosecutor to go there in the end of this month in the capacity of a witness," Tahiri told Pristina-based Dukagjini TV.

"It was something I expected to happen because in 2018 we had intense communication with the Specialist Prosecution in my capacity as Minister of Justice. I saw that this [the invitation] could happen because of these communications, but I cannot speak about it because they are confidential documents and their disclosure represents a criminal offence," he said, without giving any more detail about the nature of the communications with the prosecutors.

Tahiri's invitation comes nearly three months after an official at his office, Rilind Berisha, was also questioned by the Hague prosecution.

Since last year, the Specialist Prosecutor's Office has interviewed around 40 former KLA fighters, including several others who are also high-profile politicians. Many have said they wanted to prove to the prosecutors that the KLA's war against Serbian forces was legitimate and 'clean'.

Kosovo's Prime Minister Ramush Haradinaj resigned in July after being asked to give an interview to the prosecutors as a suspect.