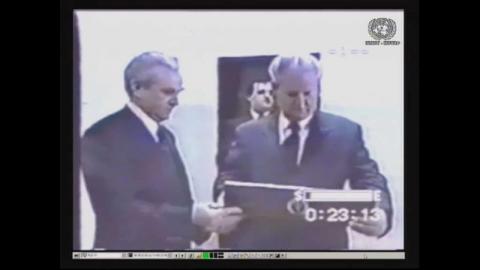 Former intelligence official Vlado Dragicevic told the Mechanism for International Criminal Tribunals in The Hague on Thursday that Slobodan Milosevic and some of his close allies did not trust Serbian State Security Service, SDB chief Jovica Stanisic, who is being retried for committing wartime crimes in collaboration with Milosevic and others.

"Generally speaking, lack of trust was very nature of this relationship," said Dragicevic, who worked with Stanisic at the SDB and was in charge of foreign contacts at the security service.

Stanisic and his co-defendant Franko Simatovic, the former commander of the SDB-run Special Operations Unit, are both charged with having been protagonists in a joint criminal enterprise led by Milosevic and aimed at permanently and forcibly removing Croats and Bosniaks from large parts of Croatia and Bosnia and Herzegovina to achieve Serb domination.

Dragicevic added that the interior minister at the time, Radmilo Bogdanovic, and the chief of state security before Stanisic, Zoran Janackovic, also did not trust Stanisic.

Dragicevic said that Milosevic's wife Mirjana Markovic was even more negative about Stanisic.

"Well in that case I would not call it mistrust, I would call it [something] much stronger, an utter lack of respect for Mr. Stanisic on behalf of Milosevic's wife," the witness told the court.

"Generally speaking, politicians' wives looked at security chiefs with hostility because they think they are neglected usually and Milosevic's wife in particular had her own very strong vision of how things should have happened in our country and she did not agree with Mr. Stanisic at all, nor did she have a problem showing it," he added.