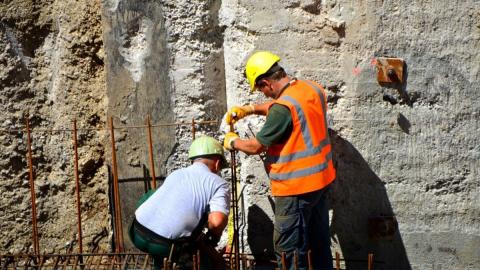 When the dust had settled, Bardhi managed to climb down to the street. Two co-workers were not so lucky: Ergys Brahimaj, 31, and Orjon Kodra, 36, lost their lives, the latest victims of a perilous construction sector.

Work accidents are among the top five causes of unnatural deaths in Albania.

The Tirana municipality, which had commissioned the work as part of a larger project to upgrade apartment block facades, has denied any responsibility for the deaths of the two men, as have the two companies involving in carrying out the work - Skela Syla scaffolding and a building firm owned by Xhimi Tarushi.

Prosecutors are probing the case and Albanian's Labour and Social Services Inspectorate has fined the two companies. But an investigation by BIRN casts serious doubt on the effectiveness of Albanian oversight bodies in protecting lives.

Hundreds of documents from oversight bodies reviewed by BIRN reveal a culture of impunity in the construction sector, with authorities turning a blind eye to systemic shortcomings in safety; victims are invariably blamed for their own misfortune, while the firms they work for escape with fines so low they are unlikely to encourage any greater caution.

According to data obtained by BIRN from the State Inspectorate of Labour and Social Services, via Albania's law on the right to information, in the first nine months of 2019, 88 work accidents were registered, in which 90 employees suffered injuries such as laceration, fractures and damage to the spine or sight.

Twenty-six people died, of whom 10 were construction workers. That is up from three construction sector deaths in 2016, five in 2017...