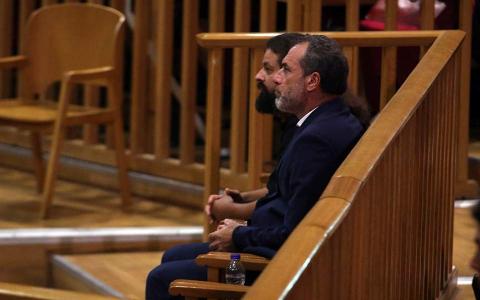 The lawyers representing former lawmaker Nikos Michos and party chief Nikos Michaloliakos in the ongoing trial against Golden Dawn clashed in court on Friday when the ex-lawmaker cast aspersions concerning the far-right party's economic management and its lax treatment of members involved in the September 2013 murder of rapper Pavlos Fyssas.

Accusing each other of being "ridiculous" and "two-bit fascists," the lawyers first crossed swords when Michos started explaining that his ideological differences with Michaloliakos are slight, suggesting that this was not the reason why he left the party in 2017.

Their outburst prompted the judges to call a brief recess, but tension was still high when proceedings resumed with Michos' testimony about the night of the Fyssas murder.

The ex-MP said he was on the island of Evia on the night in question but was notified of an ...

Nicosia residents up in arms over ‘virus camp’