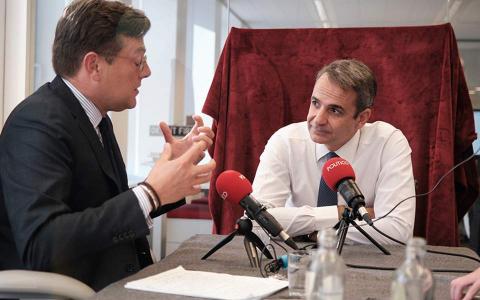 Greece stands "at the crossroads of many of the challenges faced by the European Union today" and is in an excellent position to help in talks addressing them, Prime Minister Kyriakos Mitsotakis said on Friday.

Speaking to Politico in Brussels, where he's attending his first European Union summit since being elected in July, the center-right prime minister said that the spike in migrant and refugee arrivals from Turkey, Turkish military operations in Syria and its violations of Cyprus' exclusive economic zone are issues that concern Athens and every other European capital and on which Greece can make an essential contribution.

He called on EU leaders to adopt a "clear stance" and "unanimously condemn" Turkey's military incursion in northern Syria and to impose "targeted sanctions against anyone involved in illegal drilling within Cyprus' exclusive economic zone."