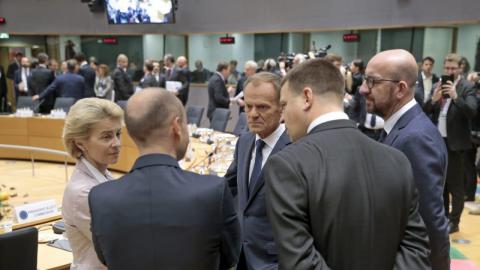 EU leaders meeting in Brussels on Friday failed to persuade France to allow a hoped-for start to accession talks for North Macedonia and Albania - and also failed to agree on a written conclusion, which, in the absence of a date for EU talks, would have sent a positive message to Skopje and Tirana about their further engagement in the process.

"The European Council will revert to the issue of enlargement before the EU-Western Balkans summit in Zagreb in May 2020," was the only official conclusion regarding the dashed hopes of the two countries.

"We have agreed that we will remain focused on the subject and will return to it before the Western Balkan summit at spring next year," German Chancellor Angela Merkel said in Brussels on Friday, expressing her disappointment.

The deadlock on enlargement drew sharp criticism from other EU leaders. The outgoing Enlargement Commissioner, Johannes Hahn, tweeted that it was a matter of "extreme disappointment" and that the citizens of the two Balkan countries were now "rightly disappointed to the bone".

"The responsibility for this failure is not with the countries [North Macedonia and Albania] who hoped rightly for a positive decision. They delivered! It was the EU which failed to deliver because of internal issues. This damages the EU's credibility not only in Western Balkans but beyond," Hahn added in a related tweet.

"I have already exchanged views today with the prime ministers of both states and expressed my disappointment." Both the Albanian and North Macedonian leaders were "very disappointed," she said.