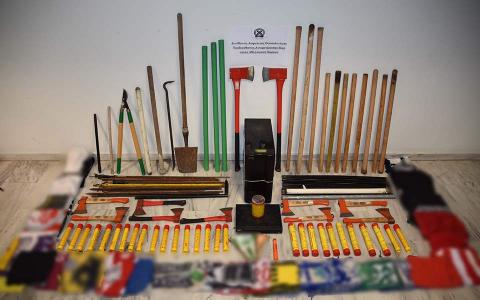 Police in Thessaloniki have raided the fan clubs of two of the northern port city's biggest soccer teams, Aris and PAOK, located in the Toumba and Harilaou districts respectively, seizing a multitude of potential weapons.

According to an announcement on Friday, the biggest haul was at the PAOK club, where officers seized 16 pairs of brass knuckles, 11 axes, 17 wooden bats, four hoes, shovels and an assortment of iron bars, flares and smoke bombs.

Police also remanded 11 people in custody in the two raids, which were coordinated by the force's department for soccer violence.