Now We Know Who Wants Slovakia’s Fascists to Survive 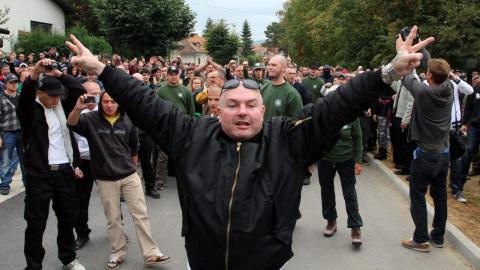 On one side were those who argued that a court ruling to dissolve the party — even if such a ruling fully accorded with the law — could not eradicate a movement that clearly had popular support.

According to this line of thinking, dissolving the party would not prevent another, similar party from emerging.

Moreover, it would only make political martyrs out of the outlawed extremists, who would then play on their alleged "suffering". Extremists can only be defeated by a better, non-extremist policy, not by a court ruling, they argued.

But those on the other side argued that if a democratic society creates mechanisms to protect itself, through the rule of law, those protections should override political questions such as: "What if banning a fascist party only increases popular support for fascists?"

They argued that if society fails to act against extremists and just closes its eyes to their arrogance and expansion, this will only stimulate their activities and help them gain more votes.

If the law is to be applied, and if the rule of law is to work, basic rules must be respected and enforced by a democratic state, they said; otherwise, the entire democratic structure could collapse.

That debate raged from the moment the Prosecutor General filed the motion in May 2017.

In the meantime, individual chapters of the file were made public through the media, and advocates of both streams of opinion began to assess the likelihood of the Supreme Court forcing the LSNS to shut up shop or continue as usual.

In estimating the chances of both scenarios, discussion revolved primarily around the quality of the complaint prepared by the Prosecutor General. Some lawyers pointed out that individual parts of the file did not appear...