As Ukraine’s Conflict Grinds On, Lawyers Take to the Frontline 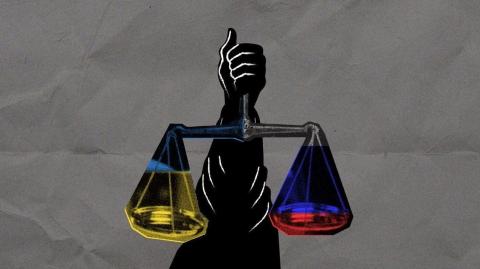 As Ukraine embraces European values, human rights lawyers in the country have become increasingly active in their attempts to tackle the harsh violations that have resulted from the annexation of Crimea and the ongoing armed conflict with separatists in the eastern Donbas region of the country.

The vast majority of these Ukrainian lawyers put the blame for conflict-related violations of human rights on Russia - but ironically, they help their clients sue Ukraine as well, because that offers an easier route to obtaining compensation.

Anastasiya Martynovska is one of the young lawyers working in the old house in Kyiv.  While talking about her work, she looks after her baby child. Martynovska founded the Regional Centre for Human Rights back in 2013, and it was initially located in the Crimean port city of Sevastopol, which at the time was still a double-flagged navy base for both Russia and Ukraine.

In its first months, the Regional Centre for Human Rights was involved in "representing citizens' interests at the European Court of Human Rights on various cases. Those were totally different applications, and we concentrated on aiding in drafting applications and handling the cases," recalled Martynovska.

But in 2014, Martynovska and her colleagues had to leave Sevastopol because their hometown, like the rest of Crimea, was occupied by Russian troops. Crimea was then annexed by Russia and incorporated into its legal system.

The international community did not recognise the annexation and imposed sanctions on the Russian Federation. Despite the international reaction, Russia managed to establish its legal regime on the peninsula. That is when the Regional Centre for Human Rights left Crimea and eventually settled in the building in Kyiv -...