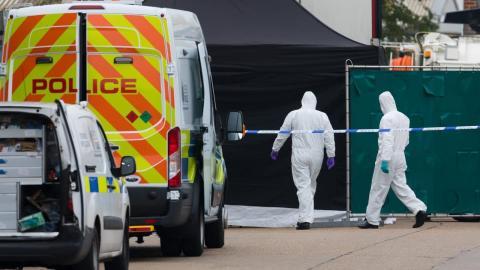 British police have charged a driver with murder after finding a lorry driven from Bulgaria containing 39 dead bodies.

Essex Police apprehended the 25-year-old driver from Northern Ireland in an industrial park in Grays, Essex County, in the east of England, and said he had driven the lorry from Bulgaria.

Experts said security checks on vehicles containing smuggled migrants had been stepped up at the channel ports in southern and eastern England.

They said that might explain why the lorry unusually entered the UK from Bulgaria via the port of Holyhead, in Wales, in the northwest of the country, instead of from the southeast.

The suggestion is that the lorry took a very circuitous route from Bulgaria to the UK via Ireland, and then crossed the Irish Sea to Holyhead on October 19.

The Deputy Chief Constable of Essex Police, Pippa Mills, said establishing the exact route of the lorry was a "key line of inquiry", including whether it crossed Ireland after leaving Bulgaria. "This is an absolute tragedy," she said. "Identification of the victims remains one number one priority," she added, refusing at this stage to suggest where they came from, or what gender they were.

The Bulgarian foreign ministry on Wednesday said it had got in contact with the UK authorities over the discovery. "At the moment, it cannot be confirmed whether the discovered lorry has a Bulgarian registration," the ministry said, adding that they still have no information about the nationalities of the dead people found in the lorry, and that UK police had warned them that their identification might take "significant...