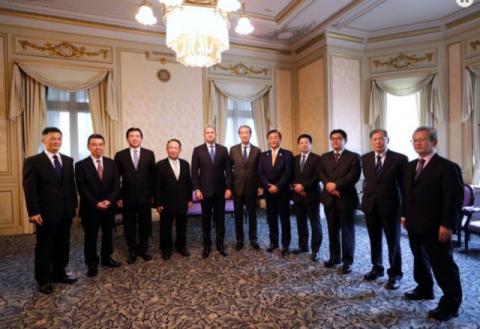 Rumen Radev Awarded Prof. Dr. Tatsuro Matsumae the honorary sign of the president for his personal contribution to the development of the relations between Bulgaria and Japan in the sphere of science, culture and education

Bulgaria has the ambition and potential to expand the export of its high-quality goods to the Japanese market, President Rumen Radev said today at a meeting with representatives of leading Japanese companies in the world in the sphere of electronics, energy, cosmetics, food production and other, organized by the Japan-Bulgaria Economic Association, the president of which is former ambassador of Japan in Bulgaria Koichiro Fukui. The meeting was also attended by the former Japanese ambassador to Bulgaria Tsuneharo Takeda, who is also member of the council, the presidential press office reported.

The Head of State highly appreciated not only the Japanese investments made in the Bulgarian economy so far, but also the bilateral economic partnership, which brings along with it also "the recipe for the Japanese success, based on high quality, efficient structures and business relations." In Rumen Radev's opinion, the positive example of cooperation between Bulgarian and Japanese companies in the production of milk and dairy products creates conditions for a much more active presence of Bulgarian food products in Japan, which is among the leading countries in the world that import food. The demand for Bulgarian wine, rose oil and processed foods is increasing in the country.

The sphere of high technologies was highlighted as particularly promising for partnership. The representatives of Japanese companies noted our country's traditionally strong positions in the sphere of information technologies and part of them work with...