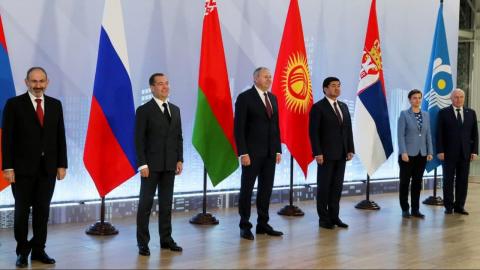 Serbian Prime Minister Ana Brnabic on Friday signed a free trade deal with the Russian-led Eurasian Economic Union, EAEU, in Moscow, after the EU warned that it will closely monitor such relations, as Serbia is a candidate for joining the European Union.

Beside Brnabic, the deal was signed by the Prime Ministers of Russia, Belarus, Kazakhstan, Kyrgyzstan and Armenia.

Brnabic insisted that the deal was not problematic regarding Serbia's EU integration process. "This is no way contrary to our [pro] European politics; I think this is complementary to our European politics and our EU path. Because it is in the EU's interest to have an economically stronger … Serbia … and a free trade agreement with the EAEU will provide us those chances," Brnabic said after the singing ceremony.

Brnabic went to Moscow with Trade Minister Rasim Ljajic who earlier told the Serbian media in September that it was not a political deal but just a trading agreement, like those Serbia had signed with Turkey and CEFTA - the Central European Free Trade Agreement.

In his words, as the Euro-Asian economic union had functioned as a unique whole from January 2015, all Serbian existing agreements need to be unified.

"On May 31, 2016, the High Eurasian Economic Council decided to open negotiations with Serbia on entering a new unified free trade agreement that would apply to all five EAEU member states," he said.

"This means that the agreements we have had with Russia, Belarus and Kazakhstan so far have to be replaced by a new, more modern agreement, now signed by Serbia with the entire EAEU, which includes Armenia and Kyrgyzstan in addition to these three countries," Ljajic added.

"Simply put, if Serbia declined unification of this agreement, we would be...