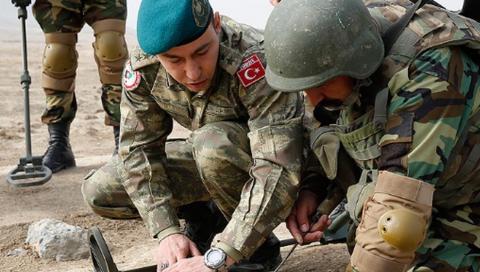 Turkey has always played a constructive and key role in NATO's Afghanistan mission since 2003, the alliance's senior representative to Kabul, Sir Nicholas Kay, said in an interview with Hürriyet Daily News at the NATO headquarters in Brussels.
Kay has served as the U.K. ambassador to Afghanistan from 2017-2018 before being appointed as NATO's senior civilian representative to Afghanistan. Here is an excerpt of the interview:
How would you describe the current state of the NATO mission in Afghanistan?
As you know, we have been there as NATO since 2003, the official start of the mission. It has been 16 years. I think over these 16 years, NATO, thanks to countries like Turkey -who made and still make a great contribution to the mission, we can see that Afghanistan's security forces are ever more capable then they were in 2003.
They were virtually nonexistent really. But now Afghanistan has special forces, air force commanders, police capable of delivering quite good security. We saw it in the elections. The Afghan security forces secured the presidential elections on Sept. 28, despite challenges from Taliban threats and actual attempts to disrupt the elections went ahead. Very challenging, very complex operation. And Afghan security forces did that.
I'm focusing on the Afghan security forces because that is the mission for NATO. We train, advise and assist the Afghan security forces. The rest is the progress of the country [that] you can see in terms of education, access to education for girls, high-level education - universities across the country full you can see. A lot of infrastructure development now: roads, water, electricity have all improved over the last 20 years. So, there is plenty of other progress, but the NATO...