Juncker: You Can't Put Trump on his Knees when you're Drunk 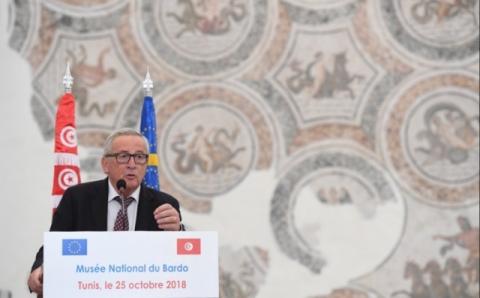 European Commission chief Jean-Claude Juncker, who will step down in December, has commented on suspicions of alcoholism.

As head of EC Juncker has repeatedly been the focus of media and social networks for his informal style of communication with EU leaders - he often greets politicians with friendly tapping on the face. In addition, social media users repeatedly pay attention to Juncker's march to official events, as it did in 2018. Then the EC leader needed help to get on the podium and get off it, then leaving with uneven gait. On this basis Juncker was suspected of alcohol abuse, which the EC denied.
In particular, the committee linked the 2018 incident to a sciatica attack.

"Oh, I was very worried at the beginning. I am not interested in such statements now," Juncker said in an interview with German media group RedaktionsNetzwerk Deutschland.

On this occasion, Juncker recalled his meeting with US President Donald Trump in July 2018, when he was able to reach an agreement to set up a working group to resolve trade disputes, remove trade barriers and remove mutual duties.

In the interview, Juncker also noted that he sees Europe's future only in unity.

"At the beginning of the 20th century, Europe represented 25% of the world population. At the end of the 21st century, it would be only 4%. I am nervous that there are demagogues and populists who are seriously stating that if Europe splits again, it's better. Nothing's going to get better, " Juncker said.

As expected, on 1 December Juncker will leave the post of head of the European...