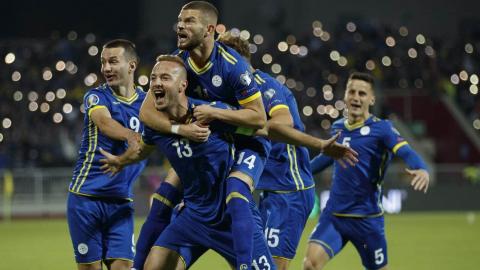 "We have worked hard with our fan community to have a pro-Western approach and sporting behavior with opponents, including respect and warm hospitality. We are an example in the Balkan region, with no excesses, nationalist or racist chants," said Eroll Salihu, secretary-general of the Kosovo Football Federation.

The Balkans are no stranger to controversy in football. Recent incidents include a UEFA ban on Red Star Belgrade fans after they were involved in racist abuse at a game in Finland in July.

The Bulgaria versus England match in Sofia on October 14 meanwhile saw some Bulgarian fans making monkey noises at black English players and doing Nazi salutes in the stadium. The England team decided to play on, however, and thrashed Bulgaria 6-0.

Amid the scandal that erupted, the president of the Bulgarian Football Union, Borislav Mihaylov, resigned after being told to step down by Bulgarian Prime Minister Boyko Borissov, while four fans were fined and banned from attending matches in the future.

There was also racist chanting from Montenegrin fans during England's visit to Podgorica in March for another Euro 2020 qualifying match, which England won 5-1.

England defender Danny Rose said that he "was lost for words" after Montenegro were fined 20,000 euros and forced to play their next home match behind closed doors.

"I don't think it's a harsh enough punishment," Rose said in an interview with Sky Sports.

'Wage war on the racists'

UEFA president Aleksandar Ceferin stated after the Bulgaria-England match that the "football family and governments" must "wage war on the racists". Now, as the England team gears up for...