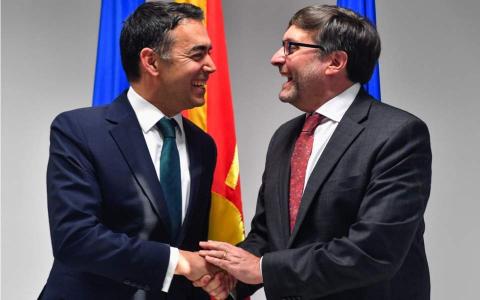 A senior US diplomat has reaffirmed Washington's support for North Macedonia's efforts to join NATO and the European Union, two weeks after France vetoed the country's EU membership talks.
Matthew Palmer, a US special representative for the Western Balkans, said after meeting North Macedonia's Prime Minister Zoran Zaev Thursday that the US was looking forward to the country becoming NATO's 30th member "in short order."
Skopje hopes to join the western military alliance by the end of the year or in January.
The country's NATO ambitions had been thwarted in the past by Greece, which had vetoed its accession over a now resolved dispute over the country's previous name, which Athens saw as harboring irredentist claims on its own province named Macedonia. [AP]

Government calls off Thessaloniki International Fair due to Covid-19

Local lockdowns not ruled out as infections rise