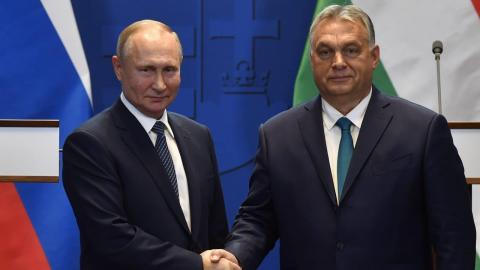 Orban's circles invested heavily in media in Slovenia and ran the kind of ugly anti-immigration campaign that is so familiar in Hungary. Unfortunately for Fidesz, the investment did not pay off. Jansa won the elections but could not form a government.

Still, his meeting with Sarec was just a warm-up for a week of moving and shaking on the diplomatic stage.

Next on Orban's dance card: Russian President Vladimir Putin, who came to Budapest for talks on Wednesday.

Jiving with Putin has become a kind of ritual in recent years, with the two leaders taking turns to visit each other's capitals.

Last September, Putin praised Hungary as "one of Russia's key partners in Europe", a statement that raised a few eyebrows in Western Europe. (Orban usually shrugs off criticism by listing Western European leaders who are just as welcoming to Putin — and Russian business — as he is.)

Despite the annexation of Crimea and conflict in eastern Ukraine, analysts say pragmatism and economic interests trump principle-based foreign policy in Hungary — and in some bigger EU countries as well.

According to Nezopont, a think tank close to the Hungarian government, 43 per cent of Hungarians have a positive view of Russia while 36 per cent view Moscow critically.

While Hungary depends heavily on Russian gas, there is more to Hungarian-Russsian relations than energy issues. Hungarian Foreign Minister Peter Szijjarto has expressed his admiration for Russian Foreign Minister Sergei Lawrow while Orban himself is known to be a fan of Putin's strong-arm politics.

"We are and remain members of NATO and the EU, but this does not rule out having a political cooperation with Russia," Orban told a news conference (in which only media loyal to the government...