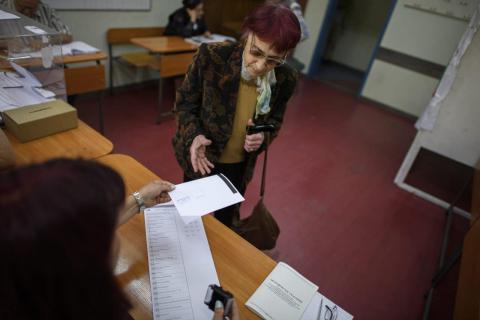 Control of 19 out of 28 regional cities in Bulgaria will be contested in the second round of local elections held on 3 November, though experts predict little drama and a repeat - albeit less decisive - victory for the ruling GERB party of Prime Minister Boyko Borsissov, compared to its record 2015 local elections result.

The party only won six regional cities - and backed two independent candidates - in the first round on Sunday, 27 October. By contrast, in the 2015 elections, the party won ten cities straight away in the first round and 22 overall.

The most important vote takes place in the capital, Sofia, where incumbent mayor Yordanka Fandakova faces former State Ombudsman Maya Manolova, who is backed by a plethora of organisations, including her former party, the Bulgarian Socialist Party, BSP and smaller centrist parties that, ironically, opposed the BSP until recently.

An Alfa Research poll from Wednesday put Fandakova in the lead with 55.3 per cent of the votes compared to 44.7 per cent for Manolova. But a significant 17 per cent of voters remain undecided who they back, Alfa Research says, which may yet create a surprise.

One reason for the high percentage of uncertain voters is because two other candidates who fared relatively well in the first round of the election have not endorsed either Manolova or Fandakova.

Those are the nominee of the centrist-liberal coalition Democratic Bulgaria, Borislav Ignatov, and the independent candidate of the Save Sofia movement, Boris Bonev. They won 12.2 and 10.8 per cent of the votes respectively.

Whoever wins the mayoral race in the capital, GERB and its ultra-nationalist partners, VMRO and Ataka, will still dominate decision-making in Sofia on the City Council. Of the 61 members...