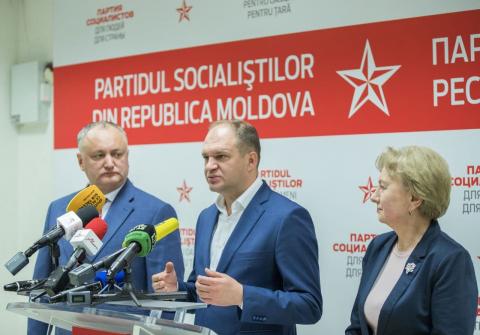 Socialist Party candidate Ion Ceban won the mayoral race for Chisinau in the elections on Sunday with 52.39 per cent of the votes cast.

The pro-European candidate and co-president of the ACUM bloc, Andrei Nastase, scored 48.61 per cent.

According to data from the Central Election Commission, Ceban won the votes of 123,807 citizens, while Nastase got 112,513 votes.

"I want to assure you that I will be the mayor of all the citizens, the only solution is to work together. This we will do starting tomorrow," said Ceban on Sunday night at a briefing at Socialist Party headquarters along with President Igor Dodon and the leader of the Socialists, Zinaida Greceanii.

Ceban also told the public broadcaster that signing a coalition agreement at the municipal level with the representatives of the ACUM bloc will be one of his main priorities this week.

However, President Dodon said on Sunday that concrete projects rather than politics should be the focus at City Hall.

"Today begins a positive new chapter in the modern history of our capital. There should be no euphoria because he must be the mayor of all Chisinau. No euphoria, people expect good things for Chisinau - roads, water," said Dodon.

Nastase did not make any comment anything after his defeat. During the vote on Sunday, he alleged there had been attempted fraud in some areas in Chisinau and promised to investigate it.

Some of the ACUM`s bloc deputies wrote on social media that they had to learn their lesson from the municipal vote ahead of the next electoral campaigns.

At the national level, another 384 places across Moldova held second-round votes to elect their mayors with the Socialists also coming out on top in terms of wins.

An observation mission from...