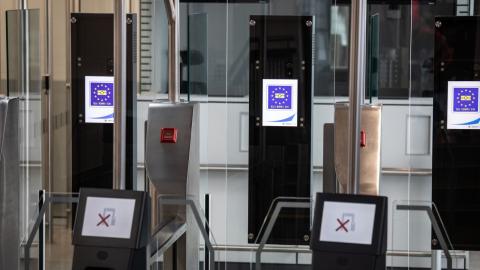 The European Travel Information and Authorisation System, ETIAS, is a visa waiver programme that aims "to strengthen the borders of the Schengen Area by pre-checking the data of travellers before they enter the zone", according to the ETIAS website.

"It will take only a few minutes to fill in an online application, which in a vast majority of cases (over 95 per cent) will result in automatic approval," Katarzyna Kolanko, the European Commission's press officer for security, told BIRN via email.

Applicants will need to answer a series of questions by entering basic information such as their name, address, date of birth and passport details. There will also be some "health and security-related questions".

A fee of seven euros will be charged for the ETIAS visa waiver will be sent to the applicant electronically after it is approved.

"After a citizen receives an OK for a security check, this security check will be valid for three years for an unlimited number of trips to EU countries; that is, until the end of the validity of the passport if a passport is valid for less than three years," Almir Sahovic, Bosnia's assistant foreign minister, told BIRN.

Bosnian citizens who spoke to BIRN said they are a bit worried that the procedure might not be that simple, although younger ones were less concerned.

"It is a minor hiccup but I don't think it will cause me a lot of complications. I use the computer and internet every day, for work and privately, I buy things online. But I understand how this may cause a problem for the elderly," said Branimir Plavsic, an economist from the town of Banja Luka.

People who are not familiar with the use of modern technology may need to seek help in completing the questionnaire.