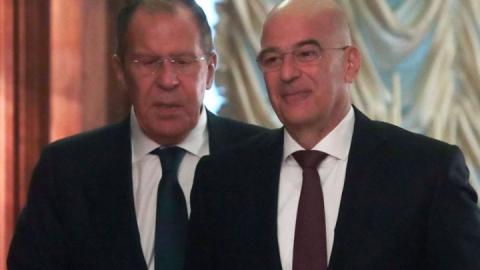 The meeting of Foreign Affairs Minister Nikos Dendias with his Russian counterpart Sergey Lavrov on 6 November was held in a very cordial atmosphere and turned a new page in Greek-Russian relations, on the basis of a sincere dialogue, Dendias said during joint statements to reporters with Lavrov after their meeting.

«Our bilateral relations are founded on age-old ties of friendship, mutual respect, and understanding,» Dendias said.

He underlined the significance of the joint Greece-Russia Consultations Program 2020-2022, which the two ministers signed and which provides for regularly held meetings at the political level.

Dendias pointed out that as Greece is emerging from the financial crisis it is returning to international fora, and intends to take advantage of its geographical position as a NATO member and a member of the European Union, and also the Council of Europe, whose presidency it will assume next year.

«Given Greece's position as a veteran EU and NATO member-state, we seek to contribute positively to the dialogue with Russia. We want to further develop our relations with a view to maintaining regional stability and enhancing security, especially at this sensitive juncture,» said the Greek foreign minister.

Dendias elaborated on Greece's diplomatic outlook and said that «given the consistent stance of Greek foreign policy that Russia is part of the European security framework, Greece can prove...

Russia sent jets to Libya to back mercenaries, says US