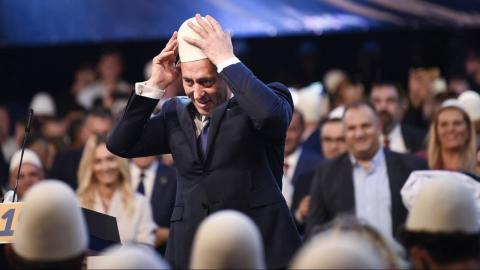 Outgoing Kosovo Prime Minister Ramush Haradinaj has rejected criticism for awarding the retiring head of the Kosovo intelligence agency, KIA, Shpend Maxhuni, with the prestigious Skanderbeg medal for "professionalism and loyalty shown in the service to the nation".

Maxhuni resigned from the top intelligence post on Wednesday, immediately drawing a media controversy over his reasons for stepping down.

Haradinaj dismissed criticism of the award, noting to the media on Thursday that Maxhuni had resigned for "personal and health reasons." He added: "Many people think he served [President] Hashim [Thaci] or Ramush [Haradinaj], but he served his country," he said. "He didn't resign because a new government is coming."

A number of members of the Vetevendosje party, which topped the October snap parliamentary elections and will likely lead the next government, have accused Haradinaj of exploiting his last days in office to make political appointments and hand out political awards.

Maxhuni regularly made headlines in Kosovo newspapers for professional and personal scandals after being appointed KIA director in 2018, after he resigned as director of the Kosovo Police.

He left the police after a national scandal over the controversial deportation of six Turkish nationals - two of whom this week received heavy jail terms back in Turkey. Turkey accused the six of belonging to an alleged terrorist movement run by the exiled Turkish cleric Fethullah Gulen. That same day, he was appointed to the KIA.

Maxhuni was also head of the police when 25 kg of gold went missing from the testimony room of the municipality of Prishtina police station in 2012. A police official was suspected of involvement but the case was closed due to lack of evidence. <...