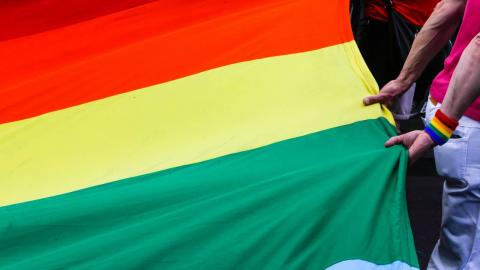 Like much of Croatia, and in particular other parts of Dalmatia, the city's population of 75,000 is deeply Catholic and generally socially conservative; in a 2013 referendum, 75 per cent of those who voted in Zadar County backed a move to enshrine in the constitution the definition of marriage as a union between a man and a woman, though the majority of eligible voters did not vote at all.

Ny'Zavian Dozier, 24, and Keith Rowe, 25, identified in US media reports as members of the US Air Force stationed in Germany, were enjoying the last days of warm weather when they went to Opera, a popular nightclub in Zadar city centre. They were attacked and beaten by a group of up to 10 men.

A police statement said Dozier and Rowe had "danced a little more vigorously" while local media described them as "acting gay".

On Facebook, Dozier uploaded photos of his bruised and bloodied face and described the attack as one of the "scariest moments" of his life.

"These guys had every intention of not letting us walk away alive," he wrote. "I have never felt so defenceless in my entire life. I truly couldn't protect my friend."

The owner of Opera and the city mayor both condemned the incident. But it was not the first time homophobia in Zadar has made global headlines.

'We do not take gays'

In August 2018, a gay couple from Brazil said they had been discriminated against when they tried to rent an apartment in Zadar through Booking.com. When the couple requested a room with a double bed, landlord Tomislav Gospic, 66, responded, "We do not take gays."

After the couple complained to Booking.com, the website removed...