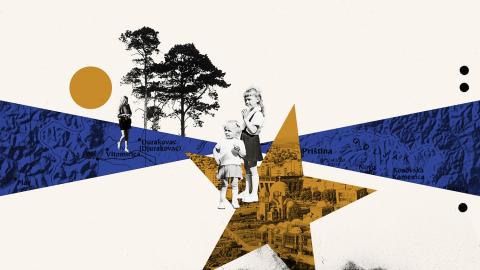 A 1330 charter of the Serbian Orthodox Visoki Decani monastery in western Kosovo records the number of settlements and households around it and in what is now northern Albania. This appears to show that the vast majority of the people there were Serbs.

Not so, argue some Albanian historians who say Serbian officials were "slavicizing" Albanian names in order to assimilate them.

In Kosovo, history has always been war by other means and so it is easier to find detailed analyses of how many Serbs and Albanians lived in Kosovo at any one time in centuries past than it is find to find analyses of numbers, trends and hence the needs of people, rather than Serbs, Albanians and others, who live in Kosovo today.

Statistics have been marshalled or massaged to support one side or another, or simply guessed at — all of which makes cogent analysis of Kosovo demographics far more difficult than anywhere else in the Western Balkans.

For example, according to Eurostat, the EU's statistical agency, which takes its data from ASK, the Kosovo Agency of Statistics, in 2010 Kosovo's resident population was 2.2 million but in 2011 it was 1.79 million.

So did more than 400,000 people suddenly die or emigrate? Of course not.

The explanation behind this statistical cliff helps us understand why politics has made it so hard to know how many people live in Kosovo.

The explanation behind the country's statistical cliff helps us understand why politics has made it so hard to know how many people...