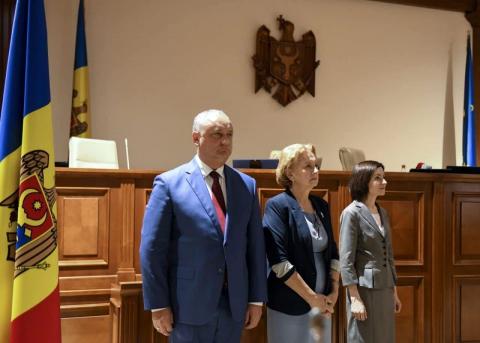 Bolea theatrically ripped up a copy of the coalition document in front of the cameras, noting that the agreement had provided for a modification of the Public Prosecutor's Law, as was recently voted by parliament.

"On November 6, the law was terminated, the contest was cancelled, and the Prime Minister came cowardly forward with a project to take responsibility [for the nomination] - by which she wants to personally pre-select the candidates - disregarding the largest faction in parliament," Bolea said, meaning the Socialists.

He gave Sandu a 3pm Friday deadline to withdrew her proposal to take personal responsibility for naming the General Prosecutor.

On November 6, Sandu and the Justice Minister Olesea Stamate presented documents showing that two of the six members of the election committee gave very biased scores to the Socialists' favourite candidate to win. Stamate then scrapped contest on suspicion that it was being rigged.

The Socialists used a similar scheme to win the race for the post of chief of the National Anti-corruption Centre, CNA. The CNA is now led by a former counsellor to Socialist President Igor Dodon, Ruslan Flocea - despite media reports that he had integrity issues concerning his financial statements.

Sandu said on Thursday night, on a TV show, that if her cabinet was...