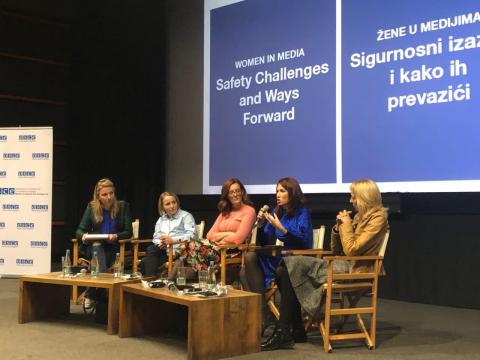 Panelists Marija Arnautovic, from Radio Free Europe, Martina Mlinarevic, a writer and freelance journalist, Dalija Hasanbegovic Konakonvic, from Al Jazeera Balkans, and Biljana Radulovic, an attorney, tackled some of the biggest problems facing women journalists in the country in their daily work.

At the opening of a panel, Hatidza Gusic, programme manager from BIRN, maintained that "female journalists in BiH are constantly exposed to gender-based violence, sexual harassment and constant discrimination just because they are women".

"This violence is especially visible online," Gusic added. "We need to do more for the perpetrators to be prosecuted for the violence they have committed, instead of them believing they are safe in hiding in their anonymity."

Recent OSCE research has shown that female journalists in the country are attacked twice as often as their male counterparts.

"Unlike men, female journalists are confronted with different types of violence; they are threatened because they are women, and they are also exposed to sexual violence," said Gusic.

The OSCE ambassador to Bosnia and Herzegovina, Kathleen Kavalec, stressed that recent years had seen an increase in the incidence of hate speech, abusive comments and threats addressed to journalists through online communication around the world, including Bosnia.

"The OSCE Mission to BiH is strongly committed to supporting media freedom and protecting journalists - especially journalists," she underlined.

"Journalists play a very important role in society because they provide information and create the preconditions for transparency, which is why they often face complex and dangerous situations in their efforts to inform citizens," Kavalec noted.