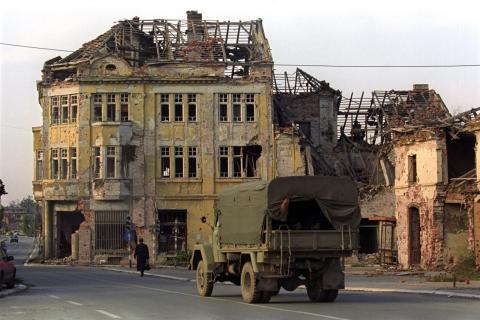 The Croatian Ministry of Foreign and European Affairs sent a diplomatic note on Friday to the Serbian embassy in Zagreb, expressing its "strongest protest over the unveiling of a memorial plaque to Mladen Bratic, commander of the former Yugoslav People's Army forces and associated Serbian paramilitary units in the attack on Vukovar".

The memorial plaque which commemorates General Bratic, the commander of the Yugoslav People's Army Novi Sad Corps who was killed in the attack on Vukovar in November 1991, was unveiled on Friday in the northern city of Novi Sad while the Serbian Army was marking the 'Day of the First Army Brigade'.

"It is scandalous and we strongly condemn it… He [Bratic] died while attacking another country," Croatian Foreign Minister Gordan Grlic Radman said on Friday, noting that the incident does not contribute to good neighbourly relations.

"The fact that a monument to a man who was the commander in Vukovar in which 2,200 people were killed will be unveiled in Novi Sad will be the subject of a formal protest to Serbia, and I have already said that to Serbian President [Aleksandar] Vucic," Croatian Prime Minister Andrej Plenkovic said earlier on Friday in Geneva, where he is attending the World Economic Forum together with Vucic.

"I was asked by journalists from Serbia how Croatian journalists are not ashamed to ask me about this while there are Mile Budak streets in Croatia," Vucic said.

On Thursday, a coalition of non-governmental organisations called Civic Vojvodina condemned the plan to unveil the memorial plaque to Bratic.

"This is another in a series of moves to mock the victims of war...