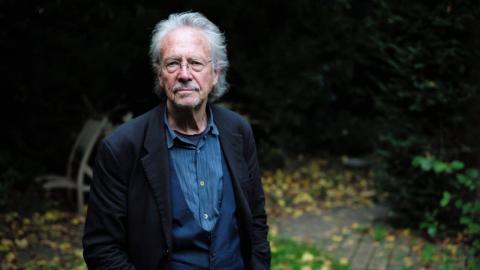 Austrian writer Peter Handke, winner of this year's Nobel Prize for literature, confirmed on Thursday evening that he was given a Yugoslav passport in 1999 when the country was under the rule of Slobodan Milosevic.

News website Intercept reported that Handke got the passport on June 15, 1999, a couple of days after the NATO bombing of Yugoslavia was over and Milosevic's forces had withdrawn from Kosovo, where they had been waging a military campaign against ethnic Albanians.

A photograph of the passport published by Intercept showed that it was issued in Yugoslavia's embassy in Vienna and that his citizenship was 'Yugoslavian'.

Handke then confirmed to Serbian newspaper Vecernje novosti that he did receive the passport.

"I do not have Yugoslav citizenship, I just got the passport so I could travel," Handke said.

Handke expressed a pro-Serb stance during the 1990s wars, and spoke at Milosevic's funeral in 2006 after he died during his war crimes trial in The Hague.

He has also expressed support in the past for Bosnian Serb political and military leaders Radovan Karadzic and Ratko Mladic, both of who have been tried for major crimes including the genocide of Bosniaks from Srebrenica, Reuters news agency has reported.

His sympathy for Serbia during the war years under Milosevic's regime has long been a source of controversy, and erupted again when the Nobel committee announced that he won the literature prize.

Intercept found the image of the Yugoslav passport on an Austrian National Museum website called Handke Online, and it originally came from the archive of an Austrian called Hans Widrich, to whom Handke had given several personal items.

Intercept reported that Widrich explained that he had once...

Vucic and Dodik on Dayton Agreement: "No changes without consent of Serbian people"

"Yes, there is a panic over air pollution", Vucic said, sending a message to Trivan

Media: This man must be replaced