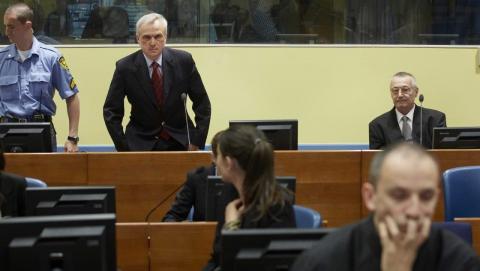 The UN-backed Mechanism for International Criminal Tribunals has announced that it has extended Jovica Stanisic's provisional release until April 30, 2020 because of his continuing illness.

It said that the extension was possible because "there is no indication that he has ever engaged in any practice undermining the administration of justice".

Stanisic, the former head of the Serbian State Security Service, and his co-defendant Franko Simatovic, the former commander of the State Security-run Special Operations Unit, are both being retried for having been protagonists in a joint criminal enterprise led by Slobodan Milosevic aimed at permanently and forcibly removing Croats and Bosniaks from large parts of Croatia and Bosnia and Herzegovina to achieve Serb domination.

Simatovic is the ongoing attending trial hearings in The Hague.

Stanisic has been on provisional release in Belgrade since July 2017 and his release has been extended several times so far.

Both Stanisic and Simatovic pleaded not guilty in December 2015 after the appeals chamber of the International Criminal Tribunal for the Former Yugoslavia overturned their acquittal in their first trial.

The appeals chamber ruled that there were serious legal and factual errors when Stanisic and Simatovic were initially acquitted of war crimes in 2013, and ordered the case to be retried and all the evidence and witnesses reheard in full by new...