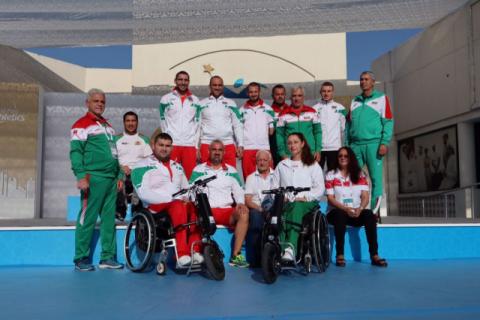 As of last night Bulgaria has its first two world champions from the Dubai 2019 World Para Championship. Ruzhdi Ruzdhi and Hristiyan Stoykov won the gold in the shot put and 1,500 m run respectively. They are part of the official team of the Bulgarian Paralympic Federation led by Iliya Lalov. AmCham Bulgaria supported the participation of the Bulgarian athletes by covering the registration fees for the championship.

"We are happy that at the start of the World Para Championship Bulgarian athletes won two gold medals. Our joy increases more, because AmCham Bulgaria supported the Bulgarian Paralympic Federation to secure the representation of the athletes at this global event," said Olivier Marquette, AmCham Bulgaria President.

"Thanks to the Ministry of Youth and Sports and the support of the AmCham Bulgaria we succeeded to prepare ourselves for the World Para Championship 2019. This is the most competitive championship ever in athletics with 1,400 athletes from 122 countries taking part. It is the most important qualification round for the Tokyo 2020 Summer Olympic Games," said Iliya Lalov, Chairman of the Bulgarian Paralympic Federation.

In fact the combination of the financial need...