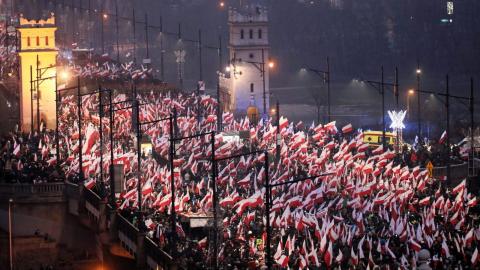 This year's event on Monday follows a general election in October that handed the ultranationalist Law and Justice party (PiS) a second term in power and saw 11 candidates from a far-right alliance win seats in parliament. Rights groups say the political climate has never been more friendly to far-right extremism.

On Novermber 9, the anniversary of the 1938 anti-Jewish pogrom in Nazi Germany dubbed "Kristallnacht", Never Again published its annual compilation (in Polish) of hate crimes committed in Poland.

Pankowski said hate crimes jumped in 2015 — the year PiS first came to power — and show no sign of falling.

The Independence March has been getting bigger every year since 2010. It was initiated by two far-right groups, All Polish Youth and the National Radical Camp, both descendants of ultranationalist organisations active in the 1930s.

Billed as a gathering of Polish patriots celebrating the reemergence of Poland in 1918 after more than a century of partition, the march has increasingly attracted people carrying racist banners and symbols. It has also featured speakers who self-identify as fascists — such as Roberto Fiore, leader of Italy's Forza Nuova party, in 2017.

In past marches, the city's main arteries have filled with ever louder crowds — mostly men — dressed in dark clothes and carrying red-white flags and burning flares.

This year, the logo of the march is a raised fist clenching a rosary, which some commentators have said resembles a white pride symbol. A video clip promoting the march featured soldiers dressing up for combat, waving swords and gripping guns.

Many, including Pankowski, were shocked last year when Polish President Andrzej Duda invited people to attend. After some toing and froing, he...