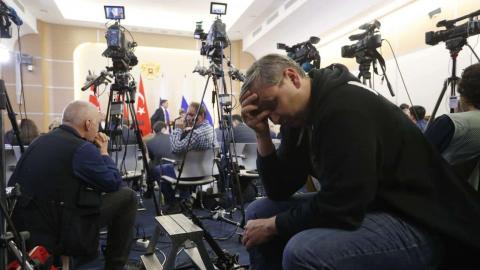 "Every journalist in this country can welcome the step of removing one offence [shaming] from criminal law," Slavica Lukic, a member of the HND executive board, told BIRN.

"But … decriminalizing one of the three offences from the chapter of honour and reputation violations will not much change the position of journalists in Croatia when it comes to criminal prosecution," Lukic told BIRN.

Offence that was ineffective in practice

Lukic says statistics show that the number of lawsuits against journalists for severely shaming someone has fallen since 2014.

That was when, under pressure from journalists, the government narrowed the provisions of the offence of "shaming" to "harsh" shaming.

After that this requalification, Lukic says, it became more difficult to prove the guilt of a journalist in court, if the journalist had cited facts in the offending articles or media coverage.

The law now said no offence had occurred "if the offender proves the truth of the claim he made or brought".

According to data that the Croatian Justice Ministry supplied to BIRN, by the end of 2018, 91 of the 119 criminal proceedings brought against journalists that year were for defamation, 13 were for insult and only five were for harsh shaming. Ten were for all three offences at once. The number of criminal charges brought against journalists for the act of harsh shaming has fallen steadily since 2014, to 11 in 2015 six each in 2016 and 2017 and none last year.

"With this criminal [law] reform, the government deleted from the criminal law an offence that had proved ineffective in practice - but ineffective for those who criminally charged and prosecuted journalists," Lukic said.