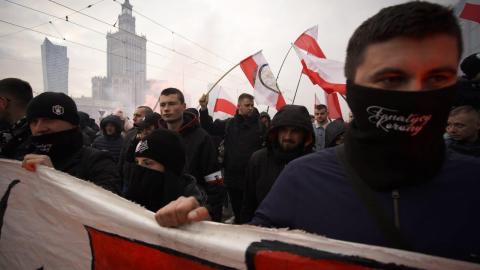 Rights groups said any doubt that Poland's annual November 11 Independence March has become a platform for far-right extremists were dispelled by this year's event. The banners alone set the tone.

"The white warriors, the Catholic nationalists are coming," read one. "We won't let Islamists in, we defend Polish goats," said another. "This is Poland, not Polin," said a third, referring to the Hebrew word for Poland ("Polin"), which also means "rest here".

For years, the Independence March has been a controversial fixture in the Polish calendar. Despite the far-right credentials of its organisers and the extremist slogans on display, media and state officials have depicted it as a gathering of Polish patriots on Independence Day.

Last year, Polish President Andrzej Duda gave the opening speech and politicians from the ruling Law and Justice party (PiS) described the march as an event for Polish families to come and celebrate the birth of the modern nation in 1918.

This year, however, despite the presence of some families, observers said any pretence of respectability was undermined by the extremism visible for all to see.

PiS politicians stayed away from the march, chastened perhaps by the fact that the far-right Confederation (Konfederacja) alliance won 11 seats in parliamentary elections last month — despite PiS efforts to win over their radical voters.

Analysts say PiS's tactics included cosying up to far-right marchers at last year's event in Warsaw. The fact that the ruling party eschewed the march this year may explain why participant numbers were so much smaller — 50,000 versus 250,000 in 2018.

A day before the march, the well-respected commentator Michal Szuldrzynski wrote a commentary piece in the conservative daily...