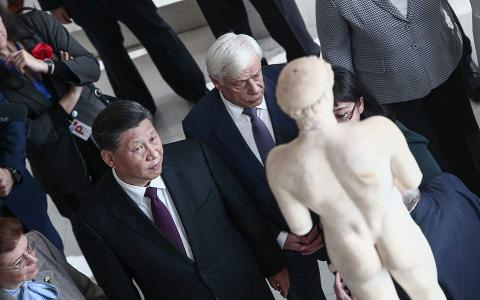 Chinese President Xi Jinping expressed solidarity with Greece on the issue of the return of the Parthenon Marbles during his visit to the Acropolis Museum on Tuesday morning, which wrapped up his official two-day visit to Athens.
"Not only do I agree with the return of the Parthenon sculptures but you will also have our support, as we too have our own [artefacts] of Chinese culture outside the country and are trying to get them home," he said in statements made before the cameras.
The issue was raised by Greek President Prokopis Pavlopoulos at the end of his one-hour museum tour, who asked for Xi's support on the issue.
"These Marbles' place is here and not in the British Museum. They are keeping them there illegally. We ask for your support," he told Xi.
Xi was welcomed and accompanied in the museum by Pavlopoulos and his spouse Vlassia Pavlopoulos-Peltsemi,...