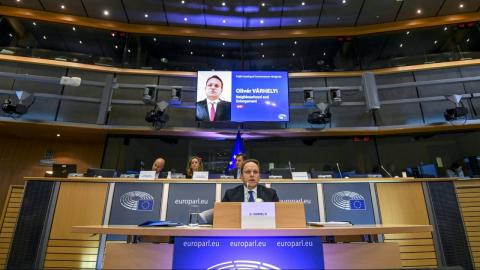 Hungary's candidate for the post of European Union enlargement commissioner set out an ambitious plan for integration of the Balkan region before the European Parliament's foreign affairs committee on Thursday, including a target of 2020 to broker a deal to settle relations between Serbia and its former southern province, Kosovo.

Career diplomat Oliver Varhelyi has been nominated by the nationalist government of Prime Minister Viktor Orban to replace Austria's Johannes Hahn in the role of steering enlargement policy, a policy further cast into doubt last month when France vetoed the start of accession talks with North Macedonia and Albania.

Orban has been a strong advocate of EU expansion to the Western Balkans since ex-Yugoslav Croatia became the last country to join in 2013.

Declaring that the EU's "credibility is at stake", Varhelyi said he would continue to lobby for the start of accession talks with Skopje and Tirana despite the objections of French President Emmanuel Macron, who says the bloc must first reform itself before taking in any new members.

And he vowed a swift conclusion to marathon, EU-mediated talks between Belgrade and Pristina that Brussels says must end in a signed agreement to settle relations before either can advance to accession. Serbia does not recognise Kosovo as independent and says it never will.

"I will work together with Josep Borrell to bring the dialogue between Belgrade and Pristina to a successful conclusion in 2020," Varhelyi said, referring to the EU's next foreign policy chief from Spain.

'No ambition, no dream'

Varhelyi was nominated for the enlargement post in the European Commission after the Parliament's Legal Affairs Committee rejected Orban's original nominee,...

Study: 75% of Bulgarians Concern that the Coronavirus Could Start Spreading in the Country
New Roman Catholic Archbishop of Alba Iulia installed with thousands of pilgrims in attendance