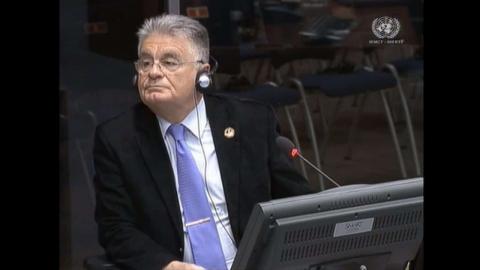 Witness Dejan Lucic told the retrial of Serbian State Security Service officials Jovica Stanisic and Franko Simatovic at the Mechanism for International Criminal Tribunals in The Hague on Thursday that the defendants did not send Dragan Vasiljkovic, alias Captain Dragan, to Croatia in 1991 to set up a training camp for rebel Serb fighters.

Stanisic, the former chief of the Serbian State Security Service, the SDB, and Simatovic, former commander of the SDB-run Special Operations Unit, are charged with having been protagonists in a joint criminal enterprise led by then Serbian president Slobodan Milosevic, aimed at permanently and forcibly removing Croats and Bosniaks from large parts of Croatia and Bosnia and Herzegovina to achieve Serb domination.

The indictment alleges that "in or about April 1991, Stanisic and Simatovic helped to establish a training centre in Golubic, near Knin, in [what was at] that time the [unrecognised] Serb Autonomous Region of Krajina in the Republic of Croatia".

One of the trainers at Golubic training centre in the spring of 1991 was Vasiljkovic, who was convicted of war crimes by a Croatian court two years ago.

Lucic claimed that he and his colleagues agreed with Vasiljkovic, who he knew before the events of 1991 under his other name, Daniel Snedden, should go to Croatia.

At that time, Lucic was an official of the Serbian Renewal Movement, a nationalist party that was one of the biggest opposition forces in Serbia in the 1990s.

Lucic said on Thursday that he introduced Vasiljkovic to Milan Martic, the Croatian Serb leader at the time, in March 1991 in Croatia's Krajina region.

"I did not follow [Vasiljkovic's] activities in Krajina. Some information reached me, some did not, but this information...