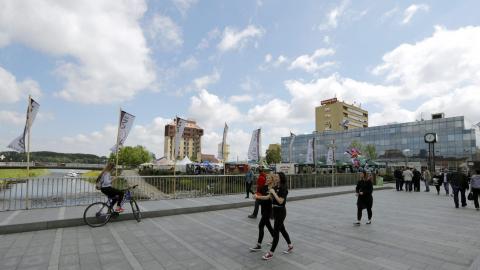 Vukovar was still in ruins when Anamarija Sivric started working as a tour guide there, not long after the town was reintegrated into Croatia.

At the time, Sivric recalled, "Vukovar was Hiroshima".

The first groups of tourists that she guided, mostly from different parts of Croatia, were even accompanied by police, and were shocked and sometimes even frightened by what they saw.

Vukovar has been rebuilt over the years, but tourists are often still keen to see the memorial cemetery where war victims are buried and the huge shell-damaged water tower that became a symbol of the devastating siege by Belgrade's forces in 1991, whose anniversary will be commemorated on Monday.

Visitors are also shown the hospital from which people were seized after the besieged town fell to the Yugoslav People's Army and Serbian paramilitaries, and where they were killed at the nearby Ovcara farm.

"Well, that's war tourism," Sivric said. "It makes no sense to come to Vukovar and not to visit the Vukovar hospital, Ovcara, the memorial cemetery."

But Sivric, like many others in Vukovar who spoke to BIRN, insisted that the town has much more to offer than wartime memories.

Journalists and officials arrive in November

Children play on a street near the iconic water tower in Vukovar. Photo: EPA/ANTONIO BAT.

Vukovar became an emblem of Croatian suffering during the three-month siege in which more than 3,000 soldiers and civilians died, 86 of them children.

The defenders of Vukovar surrendered on November 18, after which thousands of non-Serbs were expelled, thousands were transported to prison camps in Serbia, while hundreds were executed at Ovcara farm and in other places. Vukovar Remembrance Day was recently...