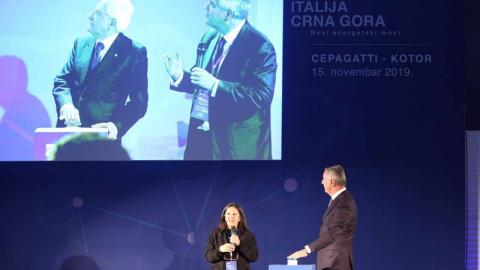 The presidents of Italy and Montenegro ceremonially turned on an undersea power cable connecting the two countries via the Adriatic sea on Friday, making Montenegro a Balkan energy hub at the flick of a switch.

The cable, running 423 kilometres along the Adriatic seabed at depths of more than 1,000 metres, represents a new transit route for energy, connecting the electricity systems of Italy, Montenegro, Serbia, Bosnia and Herzegovina and Romania.

"This project represents not only a solid energy connection between Montenegro and Italy, but a model of further integration of the European continent," Montenegrin President Milo Djukanovic said at a ceremony in Lastva Grbaljska, near the walled coastal town of Kotor, when he pressed the 'On' button at the Montenegrin end of the cable.

The Montenegrin government told Terna in July that several countries in eastern and southeastern Europe had expressed interest in agreeing with Montenegro on use of the cable.

Djukanovic's Italian counterpart, Sergio Mattarella, fired up the connection on the other side of the sea, telling media: "Establishing an energy connection is a crucial condition for the progress and development of modern society." Infrastructure, he said, "brings us closer together and makes us feel that we are part of the same project, share resources and strengthen our common aspirations."

Infrastructure, he said, "brings us...